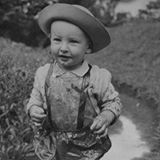 One of my earliest discoveries in the garden - mud!


As a child growing up in Nairobi, Kenya, I noticed violet flowers growing in our lawn. They were quite beautifully coloured but only tiny, some 5mm across, and I remember thinking that only an enlarged photograph (impossible with my little Brownie 127 camera!) could reveal their full beauty to the world.

That memory returned 15 years ago, when I began photographing Australian flowers. Because so many of our native wildflowers are very small, I often needed macro photography to revealing intricate details of pistils and stamens.

My subjects then spread to fauna—another childhood interest—and eventually the birds and the bees took over almost entirely.  At the outset, I didn’t know a great deal about the creatures I was photographing – in many cases I still don’t – and this made the photography something of a voyage of discovery.  Just walking into my tiny garden or around my inner-city suburb produced surprises.

Frequently the fauna and flowers had background stories needing research – more discoveries! I soon realised that combining my photographs with these stories gave a fuller, more informed ‘picture’. That led me to wonder whether the discoveries I was making would interest others. And so this blog began.


ACKNOWLEDGEMENTS
I live in North Sydney, Sydney’s second largest CBD. Yet despite all those office blocks, much of this blog is about the flora and fauna of North Sydney and of neighbouring Willoughby. That the local streets and parks are such a fertile source of material is largely thanks to the council staff and residents who maintain them. I would especially like to acknowledge the support I’ve had from Andrew Scott at North Sydney and Liz Powell at Willoughby. I’m also very grateful for the advice and support I’ve had from my wife, Jennifer Paynter.